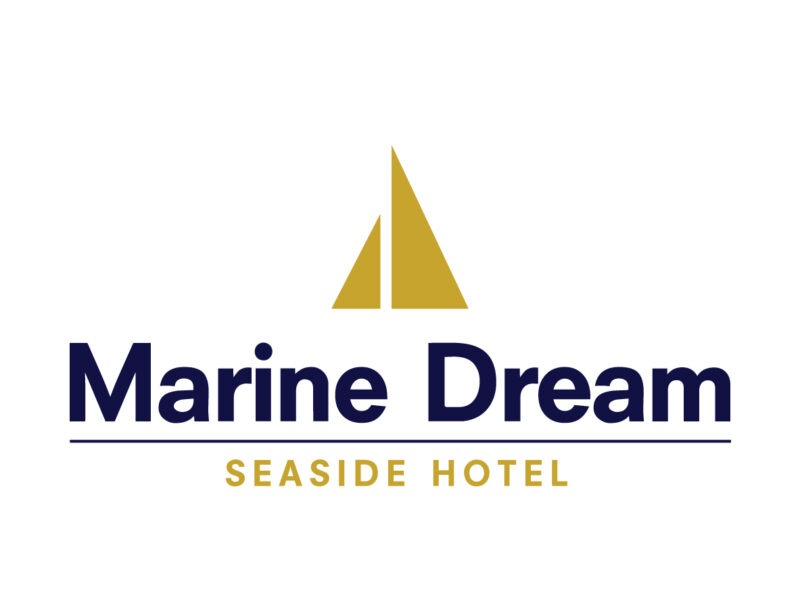 Marine Dream Hotel on Plaka beach, one of the most beautiful and attractive on Naxos, completed a series of interventions in 2021 which enlarged, upgraded and renovated both its reception areas and accommodation, as well as a section of its grounds.

The project has significantly enhanced the hotel’s functionality, appearance and facilities. These improvements, combined with the modern Cycladic design evident in both the construction and decoration of the hotel, clearly convey to potential customers that the Marine Dream is a modern tourist hotel where they will be able to enjoy a carefree and relaxed holiday in luxurious surroundings.

However, to reinforce this positive impression and further enhance its positive reception by the public, the hotel’s management thought it best to renew its business identity, too, so the upgrades and improvements would also be evident at a semiological level.

The study for the new logo had to take into account both the hotel's profile as a relatively small family business, and the profile of the customers it hoped to cater to in the future.

Which is when our company was asked to redesign the logo, while retaining the existing name.

The primary goal was for the logo to communicate the Marine Dream as a contemporary Cycladic tourist hotel which had just been extensively modernized, and to do so in a manner consistent with a business that now has the potential to grow and attract new client groups.

The study for the new logo had to take into account both the hotel’s profile as a relatively small family business, and the profile of the customers it hoped to cater to in the future.

This gave rise to the need to add a descriptive element to the name that would reinforce the hotel’s identity and better convey its type and level.

This was the context in which OPEN UP Communications’ creative team came up with their initial proposals, which also included a new descriptive element in the business name.

Given the unreserved approval of the client, the hotel was renamed the Marine Dream Seaside Hotel, which states exactly what the hotel is, while breathing new life into its corporate identity.

Design-wise, the proposal that won the client over features simple lines, a minimal feel, a palette and font that literally cry out leisure, familiarity and fun. The subtle use of gold, which also features on many of the decorative elements in the reception and accommodation areas, implies quality while also conveying the aura of summer and tranquil holidays.

For its part, the dark blue conveys dynamism as well as guaranteed quality and style—elements which are central to the identity of both the company and the people behind it.

The use of stylized sails from a pleasure boat as a central motif in the logo both supports the use of ‘Marine’ in the hotel’s name and conveys visually all the qualities it offers in the best way possible.

We are particularly happy to have brought this project to such a successful conclusion, and are delighted with our clients’ unreserved acceptance and satisfaction with the outstanding result. We would like to thank them for entrusting their business to OPEN UP Communications.

Visit our Facebook page and find interesting solutions and suggestions for your business.